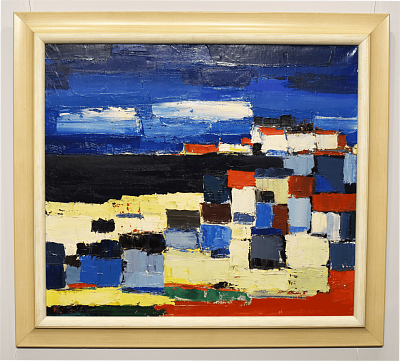 Oil on canvas, 81x92 cm, 1983 /// Herberts Siliņš (1926-2001) is one of the representatives of modern Latvian painting of the second half of the 20th century. He has participated in international and local exhibitions from the beginning of his career until the end of his life. In his paintings dominate yachts, seaside, landscape and cities. His painting style can be described as pastose and expressive with tendency to conditionality and abstract form. The paint is applied on a canvas in a thick layer with dynamic stokes, thus creating an expressive surface texture. One of the artist's favourites was the sea motif, because he was a passionate sailor. The painting depicts a stylized seaside landscape. The shapes are formed with square and elongated individual strokes, thus constructing a structure of the composition that resembles a mosaic. The artist’s signature on lower left side of the painting.
Leader: No rate
Current rate
No rate
To favorites
Take
Minimum bid:
Congratulations, you have won the auction. Within 5 working days you will receive an invoice in the e-mail address provided in your profile. Invoice has to be paid within 15 days after receival. More about payments and deliveries.