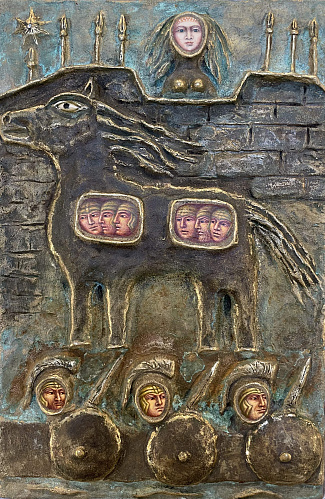 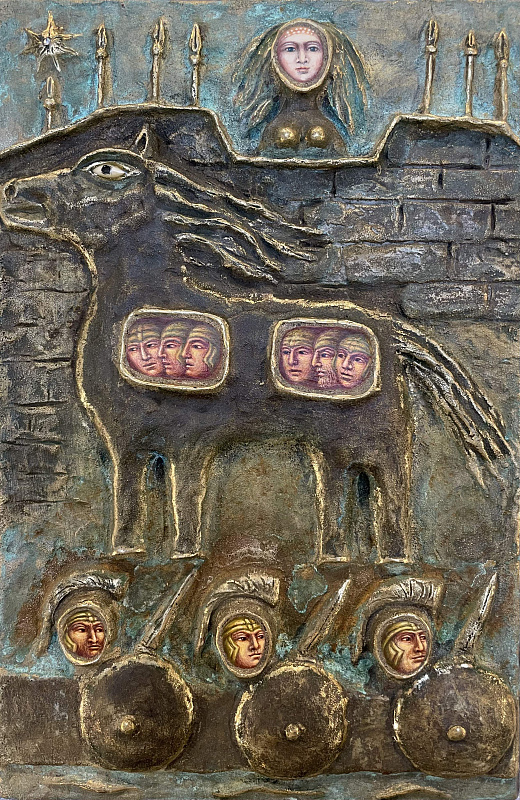 2020, 19,5 x 29, 5 cm, bronze, incrustation, author's technique./// The bronze triptych is inspired by Homer's ancient Greek heroic epiad "Iliad", created in the 8th - 7th centurieS B.C. The moulding depicts part of the mythological Trojan War between the Greeks and the Trojans, which took place around the 12th century B.C. and lasted 50 years. The reasons for the outbreak of the Trojan War are not mentioned in the epos and the events are described along with the thoughts of the characters. One of the main themes of the epos is the anger and revenge of the hero Achilles. Each part of the triptych includes a number of events that are not chronologically related to each other, similar to medieval art. The sculpture represents the mythological genre of fine art. The molding is created in a complex author's technique - in the beginning, a shape is made in which bronze is casted. The character faces and other elements are then formed using an inlay method with colored papers. This is followed by varnishing of the tab and painting in the. The bronze tab is designed in the typical style of the artist Roberts Diners. It combines the archaic worldview and the traditional medieval painting, which is masterfully and subtly created by the artist Lilija Dinere. ///II part. Trojan horse. The story of the Trojan horse is one of the most famous events in Greek mythology, depicting the events of the historic Trojan War. The term "Trojan horse" is still widely used today. The Trojan horse, according to historical sources, was a large wooden structure in the form of a horse used by the Achaean (Greek) soldiers to conquer Troy. It was made by the Greek soldier Epeius, who is also considered one of the leaders of Achaeans. The Epeius - not only did he build the Trojan Horse, but he was inside the horse with other soldiers when it reached the walls of Troy. Thanks to the Trojan horse and cunning, Achaeans conquered Troy. The Achaeans falsified their submission to the war and offered a sacrifice to the goddess of war, Athens, to triumph over Troy. The donation was the Trojan horse that was brought into the city, despite a warning from Cassandra, the daughter of King Priam of Troy, not to do so. At night, Achaean soldiers slipped out of a wooden horse and opened the city gates, allowing troops to enter the city freely. Above the walls of Troy stands Helen, her body outlined naively, disproportionately highlighting her breasts and thick hair. There is anxiety in his face. Ivory is used to decorate the Trojan horse.
Leader: No rate
Current rate
No rate
To favorites
Take
Minimum bid:
Congratulations, you have won the auction. Within 5 working days you will receive an invoice in the e-mail address provided in your profile. Invoice has to be paid within 15 days after receival. More about payments and deliveries.