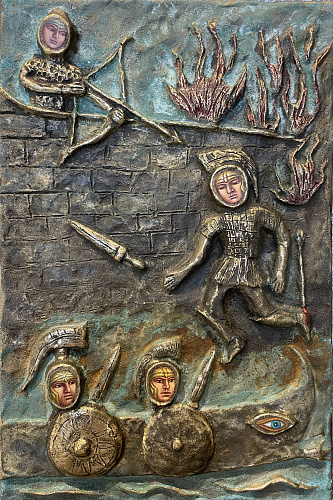 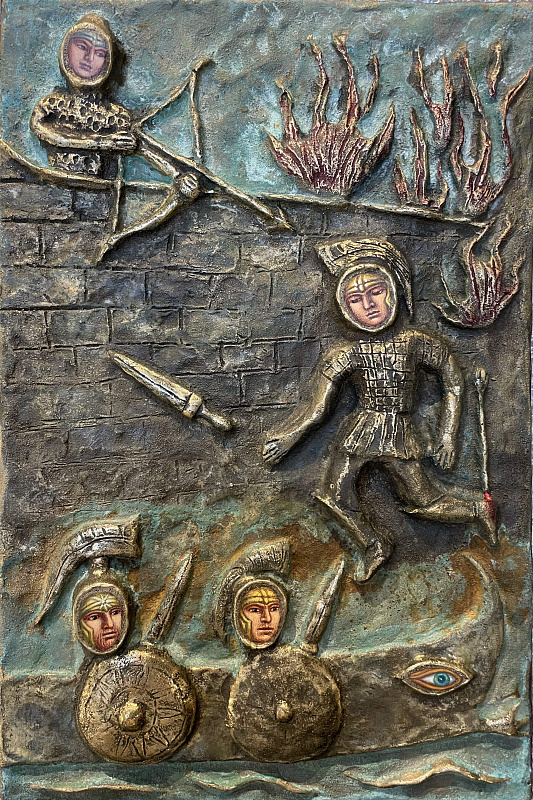 2020, 19,5 x 29, 5 cm, bronze, incrustation, author's technique./// The bronze triptych is inspired by Homer's ancient heroic epos "Iliad", which was created in the 8th - 7th centuries B.C. The moulding depicts parts of the mythological Trojan War between the Greeks and the Trojans, which took place around the 12th century B.C. and lasted for 50 years. The reasons for the war are not described in the epos, and its main theme is the hero Achille and his rage and revenge. Each part of the triptych depicts an event from the war. The sculpture represents the battle genre of fine arts. The mixed technique features both - three-dimensional elements made out of bronze carving and two-dimensional miniature paintings on smooth surfaces. Miniature paintings depict the faces of soldiers and the eyes of mythological characters. All the other elements are depicted in bronze caving. The bronze moulding is designed in a deliberately naive manner, characters shown have simplified shapes, unrealistic and disproportionate bodies. The paintings, on the other hand, are very subtle and filigree, depicting even the smallest details, facial expressions and grimaces. /// The third part of the triptych depicts the fall or death of Achilles. After Hector's death, the battle between the Achaeans and the Trojans continued. In the final battle, Achilles killed the queen of the Amazon, but fell in love with her beauty. Hector predicted this and, knowing Achilles' weakness, planned the attack when Achilles was the weakest. The myth of the Achilles heel lives on today and is used in both colloquial language and scientific terminology. In his youth, Achilles was previously given a choice - a lifetime of luxury or death in the Trojan War, but relentless glory. Achilles chose the life of a soldier, and to make him immortal, Achilles' body was dipped in the water of the underground river Styx. Only the heel remained intact, so it was Achilles' weakness. The tab depicts the moment when Hector's brother Paris shoots an arrow at Achilles' weak heel. Achilles is depicted with sadness on his face. Lilija Dinere gives the little portrait a sad mood of determination. Paris's face shows the pursuit of victory. The lower part of all three moldings of yhe triptych depicts soldiers in boats watching what is happening. One of the soldiers is Odysseus. The depiction of the boat uses personification and gives it a surreal mood, making it a living observer.
Leader: No rate
Current rate
No rate
To favorites
Take
Minimum bid:
Congratulations, you have won the auction. Within 5 working days you will receive an invoice in the e-mail address provided in your profile. Invoice has to be paid within 15 days after receival. More about payments and deliveries.